skip to main | skip to sidebar

Yup.... I said before that I never knit the same pattern again... Well, I'm eating my words now, because I made 7 Better Bucket hats. The pattern is so easy and quick to knit - it's simply addictive. And the hats make neat gifts, too. Making them with Malabrigo Merino Worsted does not hurt either :-) . What a wonderful yarn! Not a hint of scratchiness! Just soft, soft, soft.... and yet it feels 'meaty' and substantial during knitting. The colors are nice and rich for the most part. I love this yarn! 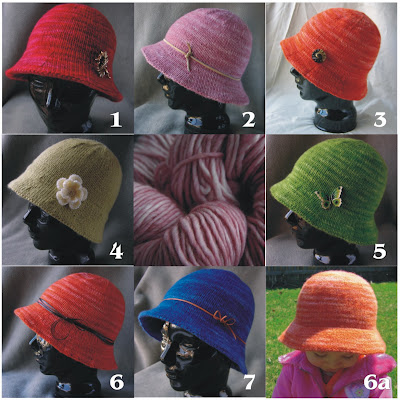 Hat #4 was made with Mission Falls 1824 Wool in Sprout. With this one, I did not make any modifications to the original pattern and you can see that the brim does not flare out much.

The remaining 6 hats were made with Malabrigo Merino and I applied the same pattern modifications to each.
The differences in the degree of brim flare were achieved through blocking, e.g. with hat #2, I flared out the brim more than in hat #7.
Hat #6a is a felted version of hat #6. I did not like that specific skein colourway, but it looked nice on my daughter, so I shrank it for her (approx. 3 min in the washer). I later made one for myself in the same, but deeper, more saturated colourway.

The Malabrigo colourways used for the hats are as follows:
1. Amoroso
2. Pink Frost
3. Glazed Carrot
5. Christmas Green
6 and 6a. Glazed Carrot
7. Buscando Azul

What's on my needles now? My first attempt at a knitted toy. I'm trying to make Lola Curly the Pig. So far, it's kind of fun.
I'm using Vanna's Choice Solid by Lion Brand, in Dusty Rose, on US size 4 needles. The resulting fabric is quite dense, actually, and feels pretty stiff. However, it beats TLC Essentials Solid, which I tried for this project in the beginning, but it felt extremely scratchy and stiff. So much so, that it could successfully double as a pot scrubber. Not very pleasant to knit with - at least not for this project and on such small needles.
Posted by Margaret Kiprenko at 7:39 PM 4 comments:

What am I working on?

My 7th a Better Bucket hat!!! Yes - 7th! I'll post more details/photos later, when all 7 will be finished, blocked and presentable. Talk about an addictive pattern! For now, however, I'm posting the details of the modifications I made to the original pattern (I wanted to make the brim flare out a bit more and to fit a 22-22.5" head without too much of a stretch).

Here is a link to a photo of the original hat by Amy Swenson (the hat's designer).

Here is a link to a free pattern for this addictive hat.


My version with modifications:

OK, here are the modification details:

Join hem and proceed as in original pattern until the crown decreases.

Since we're on the 'hat' topic, here is the photo of my version of the Koolhaas Hat.

That was such a fun knit! Easy, yet engaging enough not to be boring. This pattern provides an excellent opportunity to learn cabling without a needle.
Specs:
Yarn - Handmaiden Fine Yarn 4 Ply Cashmere (1 skein)
Needles - US size 2 and 4
Because the yarn I used is thinner than the pattern’s original, I cast on 128 sts (16 pattern repeats) and made Rows 1-8 of chart 6 times total. Finished circumference: 15-16” unstretched.
And it feels like a dream on my head! A crown of cashmere! Yum!
Posted by Margaret Kiprenko at 3:34 PM 2 comments: